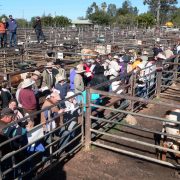 Speargrass Jewel (Purebred) sold by Nicole & Keith Burns from Speargrass Longhorns for the top price of $3,100. She was purchased by David Ovic.

Special auction items sold at the end of the Sale included:-

Marilyn Terbutt donated another quilt and it sold for $200 to Jan Bastardi.