History of the Breed

You are here: Home / About Texas Longhorns Australia Inc. / History of the Breed

The ancestors of the Texas Longhorn came from the shores of Spain with Christopher Columbus in 1493 to the Island of Santa Domingo.

In 1521, Gregorio de Villalobos brought the first cattle from Santa Domingo to Mexico; descendants of these cattle grazed the ranges of Mexico.

In 1690, the first herd of 200 head of cattle was driven northward from Mexico to establish a mission they crossed the Rio Grand which is now the western border of Texas. They traveled on to near the Sabine River which is the eastern border of Texas and settled and built the mission. These cattle were lost and scattered by the Indians and left abandoned, these cattle propagated and spread and mingled with cattle lost by the eastern settlers (White Park, English longhorns, etc).

Left on their own without the benefit of man, these animals survived by their own ingenuity. Developing through the years the traits of hardiness, disease resistance, longevity, fertility and browse utilization. 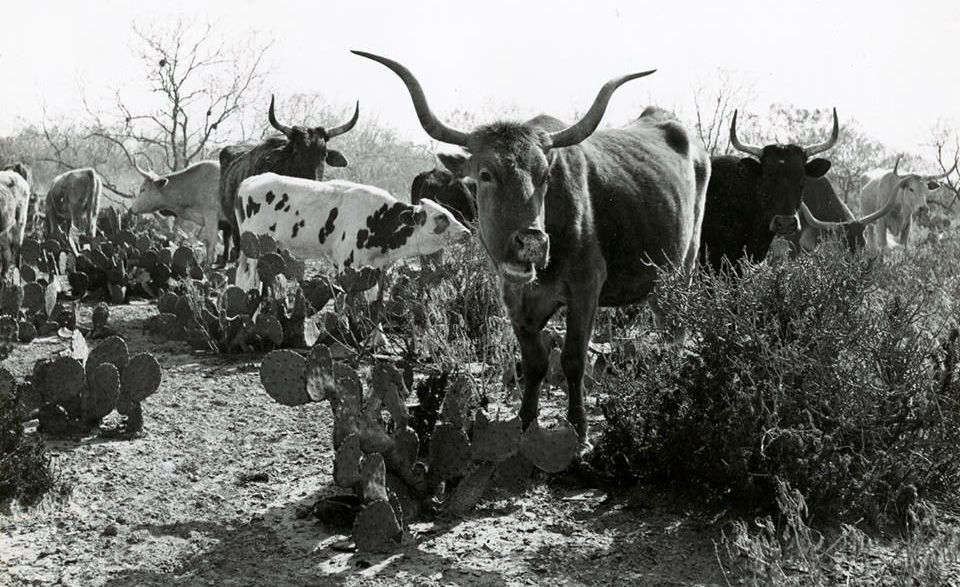 During the dark days following the Civil War, the Texas Longhorn was the financial salvation of the people of the Southwest. Men returning from war found that their only source of income was the thousands of Texas Longhorns wandering freely, worth very little in Texas the same cattle could fetch as much as $20 a head to the residents in the north.

In the late 1800s, the Texas Longhorn met with an enemy his natural instincts couldn’t fight – so called progress and the Fencing of the open ranges and the importation of other beef breeds.

National concern grew as the true Texas longhorn approached extinction. In 1927 the U.S. government appropriated $3000 to acquire a herd of the old time cattle and after a 5000 mile trip through South Texas and Mexico, 23 head were bought and became the foundation stock and were kept at the Wichita Mountains National Wildlife Refuge in Cache, Oklahoma.

This herd is still kept today but has moved location. The herd is referred to as the WR herd or family. Over the years since then it has been found that other people had stuck with the cattle that had served them so well over the years and 6 other families of longhorns have been recognized They are the Peeler, Wright, Marks, Phillips, Butler & Yates bloodlines.

It is now believed that the numbers of Texas Longhorns in the early 1900‘s was as low as a few hundred and today there are more than 250,000 registered cattle in the USA. A link to the past was saved from extinction.

In 1964 concerned breeders organised the Texas Longhorn Breeders Association of America (TLBAA), which has its headquarters in Fort Worth, Texas.

In the 1990’s a splinter group broke away and formed the International Texas Longhorn Association (ITLA).

All the registered cattle in Australia and New Zealand are registered in America to ensure Purity.